This is an extraordinary journal that took some time to read and figure out who it belonged to. Luckily the journal entries are very easy to read and well put together and dated.  Putting all the dates together and names, with the help of Mr. Jim Greco,  his research connections and no quit attitude, we were  able to deduct that the journal belongs to the belly gunner who primarily flew on the the Jane Lee who’s name was DONALD SMITH.

Diary gunner’s Birthdate is May 28th, Left U.S.A. on April 4, 1944-Jane Lee confirmed by IARC Card,
Pilot Mahon–Confirmed each time on Mission flimsies-Jane Lee is 877-6N. We know he is enlisted, not an officer
Referred to the following men in Diary:
1. Earl Clapper referred to as “Stubby” above
2. William “Bill” Hoover referred to as Bill and Hoover (not Hoved in photo error-no such person)
3. Henry Dudley-referred to as Dudley
4. Harvey Nissely-referred to as Harvey above
5.Paul W. Lyons-referred to as Lyons above
6. The only crew member left is Donald Smith (this must be him)
Donald Smith’s air medals coincide with all other crew members who received an air medal
on June 3, 1944 6/3/44 See Photo Below: 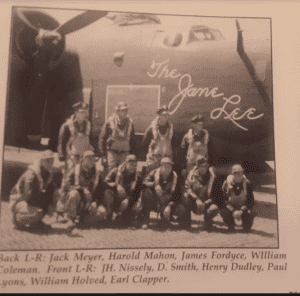 Notice the same dates on air medals for both crewmen!
(They are from the same crew). 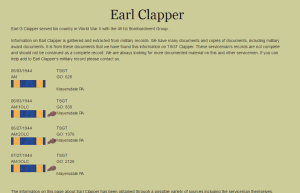 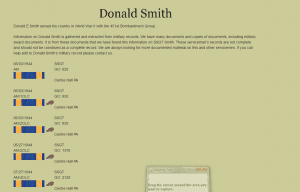 Here is the flight listing the pilot mentioned in the Journal on July 5th which enables us to connect the plane and the crew that day: 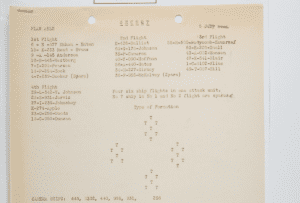 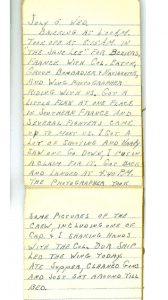 Here is one of the multiple Journal entries that lists other men, eliminating members of the Jane Lee (or other crews) as the author of the journal: 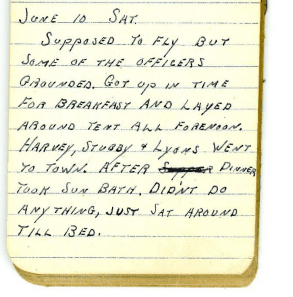 So what do you get with with this collection?
Well you get the journal obviously and 27 pictures that came with it. The pictures were all brought back by the gunner but it’s hard say what pictures he took or what pictures were available for him to purchase on base or through his buddies. Some of them have been published so they must have been available to purchase from a photographer who had multiples made up. Others are surely never published, and there are some real crazy flak photos taken in the air which surely look like they were taken from the belly of the plane. Many of these have notes on the back with the date of the mission as well. There are fantastic shots of damaged planes as well. There are two large photos, one showing planes below the belly gunner with smoke coming from the ground they likely just bombed in the winter! SUPER COOL! The other large photo is of a B-29 at the hanger. The Journal itself is in nearly perfect condition and is small pocket sized. His first entry starts on 4-1-44 leaving Topeka, then going to the Caribbean, then to Africa and finally getting stationed in Italy with the 15th Air Force. From here he has daily entries about his bombing raids. What time they left, target name and type, casualties, mechanical issues, free time leisure’s, handing out with Canadian tank crews. Most of his bombing raids were into Romania to the oil fields of Polesti but he had targets in Italy, France and Germany I believe as well.  He mentions other officers and crews and plane names. The last entry is on August 8th followed by a dated list of his missions and how many sorties he flew! 36 missions and 50 sorties! AMAZING! Impeccably detailed for the B-24 15th Air Force researcher. All entries line up with facts from the “B-24 Liberator Units of the Fifteenth Air Force” by Rober F. Dorr and also the B-24 Nose Art Name Directory by Wallace R. Forman.  This is a museum caliber research item that can be yours!
Click the link below for a complete PDF of the diary you will be getting. The photos are attached to the listing as normal. This journal entry may not be used or copied without the written consent of SMG War Relics under penalty of law.
B-24 Belly Gunner Journal PDF
We have also given permission for https://www.451st.org/ to host the PDF here indefinitely for research reference. https://www.451st.org/Stories/Pdfs/The%20Jane%20Lee%20Gunner%20Diary/Gunner%20Diary.pdf
Categories: All Items, Letters, Other Paper items, Paper Items

Whether it’s individual pieces or full collections, we’ll buy it!